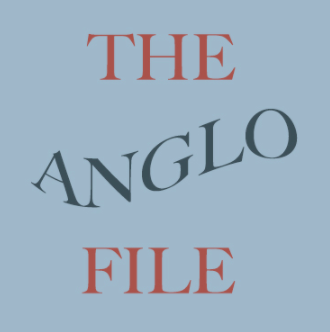 'I Put Liz Hurley in 'THAT' Dress' 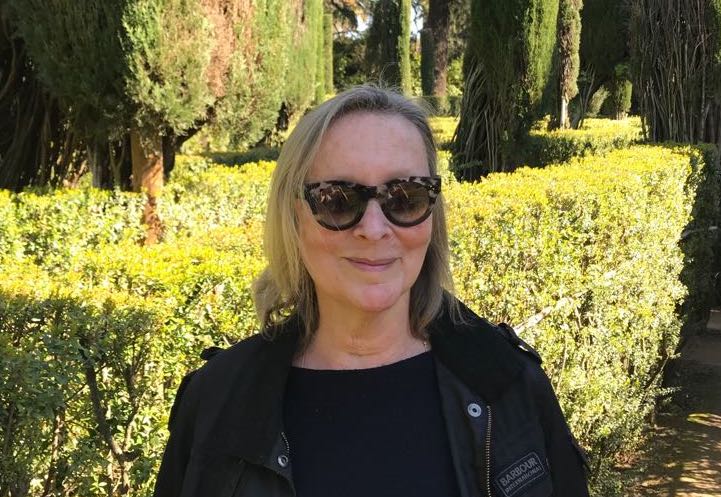 Londoner Phyllis Walters had a role in some of the most iconic British fashion moments: Liz Hurley’s safety pin dress? Check. Princess Diana’s evolution from Shy Di to sexy divorcee? Check. At 23, Phyllis founded her own PR firm and worked with designers like Catherine Walker (who dressed a young Princess Diana) and Versace (who dressed Diana, Independent Woman). Can you hear us hyperventilating through the screen? These days Phyllis is semi-retired and lectures on fashion at Leeds University and was kind enough to answer our email.

{ Subscribe to The Anglofile For Weekly British & Royal Updates }

Q: How British are you?  A: I feel very British, but at the same time, European… but we are an eclectic bunch these days, all the better for it, and it’s quite difficult to say who and what is the typical Brit. I love the humour, the eccentricity, and certainly during lockdown, the camaraderie, humour, and community spirit. What makes me British is, I think, my very ironic sense of humour. I believe this is unique to the Brits. We seem to see the funny side in every drama. I also like fish and chips.

Q: You founded your own agency and have worked with some huge brands and designers over the years. How did you start working with Versace?  A: I met them through the wonderful [former British Vogue editor] Liz Tilberis. Santo Versace and Emanuella Schmeidler (their very scary international PR) were in London to interview [new] PRs. My office at the time was in a mews, just off Berkeley Square and opposite a Condé Nast hangout called Caviar Kaspia. Liz was lunching with Santo and Emanuella, and apparently they did not like any of the new pack. With a show looming on Sunday, they had to make a decision. I was not a visible PR in that I preferred to be in the background. I wore no makeup and my dress code was more towards jeans and t-shirts — Ralph Lauren — than European glam.  [Liz] introduced me and we chatted, after which [the Versace team] asked me what I was doing on Sunday. This was Friday. And I said, “Probably going to the park with my 3-year-old.” “Nope,” they said. “Can you get yourself to Milan?” So I said sure, and they asked me if I would come over for the show and PR for them, then and there. No proposal, nothing. A ticket, and off I went. I worked with the Versaces for many years. We launched the [London] flagship, which the Sunday Times stated was “The Party of the Decade,” and of course, introduced Gianni, Donatella, and Santo to Diana, Princess of Wales — the rest is history. We closed the store, and she came in for a private visit, which was fun. She adored Versace. He adored her. Q: You worked with Princess Diana in the 80s and 90s. What’s something about her most people don’t know?  A: I think what most people don’t know is she had a wicked sense of humour. Liz [Tiberis] and Princess Di often had lunch on a Friday, either at Le Caprice, or Kaspia. From time to time, I joined them for coffee and a chat. The chat was always lively, and full of humour. Her laugh was totally infectious, and she just had to look at a person and they melted. I loved that about her. Q: What is your favorite Diana look, and why?  A: My favourite looks actually are her Versace looks as she broke away from the constraints of royal life, and having a great body, she looked sensational.Versace cut like no one else, and she carried those dresses off with fantastic grace and sexuality. Her statement moments, I felt. I don't think I was ever forgiven by Catherine Walker, who dressed Diana, for so many years, but then, at the same time it was clear that [Diana] wanted to break out and always used fashion to communicate. So why not? This was the most photographed woman in the world. She knew how to carry off a look. 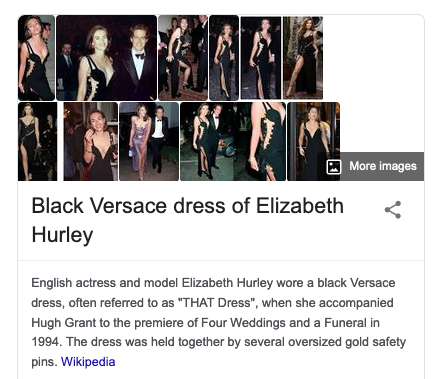 Q: What have been some other standout moments in your career? A: My other standout moment was the fluke. [Versace] were repositioning, and targeting the young celebs. My assistant Jane went to school with Liz Hurley. A friend of mine was married to a guy who was marketing the low-budget film, Four Weddings and a Funeral. Premiere was to be held at the Odeon Leicester square, and they were thrilled. I asked who was in the movie, and they said a guy called Hugh Grant... At which point, my assistant Jane, said, “Oh, I know his girlfriend, Liz.” So, we targeted Hugh to dress him for the premiere. Unfortunately, when he and Liz came in, it didn't work. The suits were not the right size for him. We had a rail of dresses going back to Milan — end of season. This was from a collection, which was not widely used. The press were not that crazy about it. Liz asked if she could borrow a dress... She tried a dress that Helena Christiansen had worn in the Milan show, and it fit like a glove. Liz said, “Not sure. It’s a bit risqué. But if I can take it home to try, I’ll see. I’ll let you know.” She called later. She was going to wear it.  We called the two most important paparazzi, Dave Bennett and Richard Young, and said, “Concentrate on Liz with your cameras. You’ll be happy.” The shot went viral — global.  Jane Proctor of Tatler called Estee Lauder to say we have your new face. And that also is history. It was a fluke, but then the best PR moments are always flukes. They are never planned. It still runs, this dress, and will run and run.

Q: How long have you lived in London? And what do you like most about your neighborhood? A: I have lived in Hampstead, one of the last remaining London villages, since the eighties. It’s my favourite part of London for many reasons. We have Hampstead Heath, a vast stretch of park not unlike Central Park, only more like a natural woodland. You can walk for miles and end up at this amazing house-gallery-restaurant called Kenwood House.  The thing I love about Hampstead is that it is incredibly cosmopolitan. This area attracts all nationalities, primarily because we have so many schools. It’s always busy and lively. It’s very local; you know your greengrocer and so on. Masses of pubs, and at the weekend the rest of London comes up to the pubs, to the Heath, and it’s buzzing. 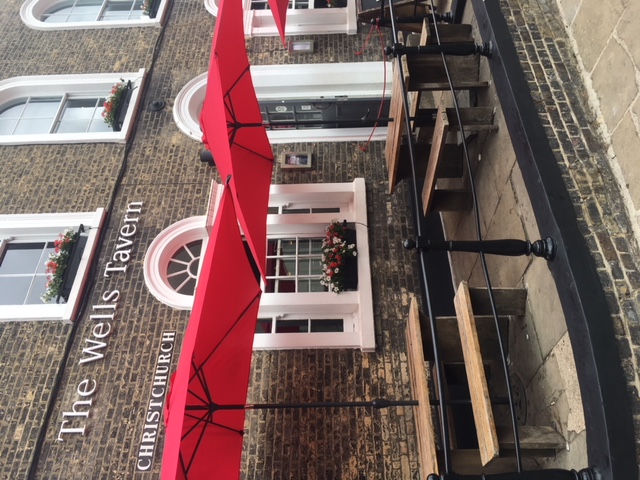 Q: What do you think makes you a Londoner?  A: Londoners are pretty live and let live. I do not think we are constrained at all. I’ve lived in New York and LA, and I think we are freer and open to a really diverse range of people. You can be who and what you want to be, with no one telling you otherwise. Here, just be yourself, or indeed anyone else, if that suits you. Q: Do you have a favorite London spot Americans wouldn’t know about? A: My favourite spot is on the River Thames, a ten minute walk from Petersham Nurseries in Richmond. You can walk down this tiny hidden path and then to the river, which is a hive of activity but at the same time very peaceful. The walk goes past a field, with rare cattle — imagine, this is London! You could be deep into the British countryside. In the summer, you can take a small boat down the river and if you’re lucky and it’s sunny, it really is one of the prettiest places to be. I love Petersham and often head over there for a bite and a glass of rosé in the sun. Not quite the Med, but not bad either. Q: To conclude… our knowledge of 90s fashion and celebrity PR in London is drawn entirely from the sitcom Ab Fab, about a champagne-swilling celebrity publicist and her BFF. That’s what your life is like, right? A: My world is not like Ab Fab now; it certainly was. Most people thought that was an exaggeration of what it was like then. Personally I think it’s an understatement. There is an episode of Ab Fab when they are doing the seating plan for the front row of a show, and the assistant has found a princess for the front row, but not the right princess. It was so accurate and funny. There were days when you just had to laugh, as they were so ridiculous.  Much of what I did was over lunch, which is good because I prefer lunch to dinner — so that was the perfect job for me. The reason I actually went into PR was that I was tempting for an American agency called Rogers Cowan and Brenner, and the managing director, a very scary American woman based in London who used to send me to cash her cheques at the Connaught Hotel (don’t ask me why), always went for lunch. She came into the office around 11:00, went for lunch around 12:30 came back at 3:00, left at 5:00. I thought, ‘Wow, this is the job for me.' I launched my own agency when I bumped into an old boyfriend. He told me he had just started a line with his then-girlfriend, who was French, and thus the French Connection was born. That was why I started my own agency; he asked me if I wanted to PR for him. I had just left an agency, and I thought, ‘Why not? I‘ll do this for a year or two see how it goes.’ It went quite well.

Copyright © 2020 *The Anglofile*, All rights reserved.   Feedback and tips welcome at hello@lovetheanglofile.com Want to change how you receive these emails? You can update your preferences or unsubscribe from this list. *honi soit qui mal y pense*